The Kunstverein Darmstadt e. V. Dates back to the founding of the art association for the Grand Duchy of Hesse in 1833 under the protectorate of Grand Duke Ludwig II, making it one of the oldest art associations in Germany. During the Vormärz, the emancipating citizenship emanated from the desire to provide a framework for the fine arts and thus themselves in addition to the courtly interest in theatre and music. The driving force behind this foundation was Jakob Felsing (1802-1883), who returned to Darmstadt in 1832 after ten years in Italy, who settled here as a printer and engraver and headed the art association until 1876.

Changing exhibition locations determined the life of the association. Numerous branch locations were created such as in Offenbach, Mainz, Worms, Friedberg and Gießen. In 1836 the art associations of Darmstadt, Freiburg, Karlsruhe, Mainz, Mannheim, Strasbourg and Stuttgart merged to form the Rhine Kunstverein. The lively exchange of traveling exhibitions promoted private collecting in particular. Like other art associations, in the 19th century they took on a central role in promoting art, which was still heavily dependent on court orders.

With the move to its own exhibition building in 1889, the Kunstverein gained further importance for cultural life in Darmstadt. The location could hardly have been better, being situated on the central Rheinstrasse and in the immediate vicinity of the Main-Neckar train station, which opened in 1846, and the Ludwigs train station from 1858.

Additionally, the location was of great historical importance. In order to give space to a new bourgeois class consisting of the military and administrative officials, a new district was built there from 1810 according to the plans of the court architect Georg Moller (1784-1852), who set the tone for classicism. As a result, cultural and social life had also shifted to the new district with representative buildings - such as the casino.

For the new building of the Kunstverein, the city provided the property of the former northern guard house of the Rhine Gate, which had once formed the western entrance to the city. Its portico was retained as the entrance to the new neo-Renaissance Kunsthalle building.

In addition to the task of organizing exhibitions, membership fees were invested in works of art. The art association had up to 3,000 members around the turn of the century and a considerable fortune until 1929, which was lost during the hyperinflation.

During the time of National Socialism, local landscape painters and open propaganda exhibitions were increasingly shown. In 1936 the Kunsthalle Darmstadt took part in the touring exhibition 'Degenerate Art', which was intended to defame artistic modernism. In the so-called fire night of September 11, 1944, the Moller district was almost completely destroyed. With it, many of the buildings that shaped the cityscape disappeared. The ruins of the Kunsthalle were torn down after the war. Only the portico from Moller's time remained - without the gable - as a testimony.

As a successor to the Kunstverein, the Neue Hessischer Kunstverein was founded as early as 1945, which then - again at different locations - organised exhibitions for the Darmstadt visitors. With the Darmstadt Talks and the Summer Courses for New Music, the city gained cultural importance in the 1950s. A new era was also about to begin for the Kunstverein: the members of the Darmstädter Kunstverein, renamed in 1956, decided to commission a new building on the site of the old Kunsthalle. The 1955 competition was won by the architecture professor Theo Pabst, who taught at the Technical University at the time, and a decidedly modern exhibition building was built according to his plans in 1957. With its clear shape, simple materials and design elements, its functionality and tension between closed and open areas, the building stands for the architecture of classic modernism of the 1950s and as a manifesto of a new beginning after 1945.

The new Kunsthalle on the Steubenplatz was used as the only municipal exhibition space until the Mathildenhöhe replaced it. The association soon reached a size of 800 members. The interaction of the city society, the New Darmstadt Secession and the Kunstverein contributed to the widespread recognition of Darmstadt as a city of culture.

Theo Pabst expanded the art gallery in 1964 to create offices and additional exhibition space. On the occasion of the 150th anniversary of the Kunstverein, the northern extension was added and reorganised in 1987.

Since 2014, the management and members of the Kunstverein have been pushing ahead with the comprehensive renovation in accordance with the listed buildings. The facade, the skylight and the building services could be renewed in stages with public and private funds. Finally, the more than 60-year-old Theo Pabst building received a newly designed forecourt, which emphasizes the steel and glass facade as a showcase for the arts and invites you to linger. In the same pandemic year of 2020, government grants were used to advance the expansion of the «digital Kunsthalle». 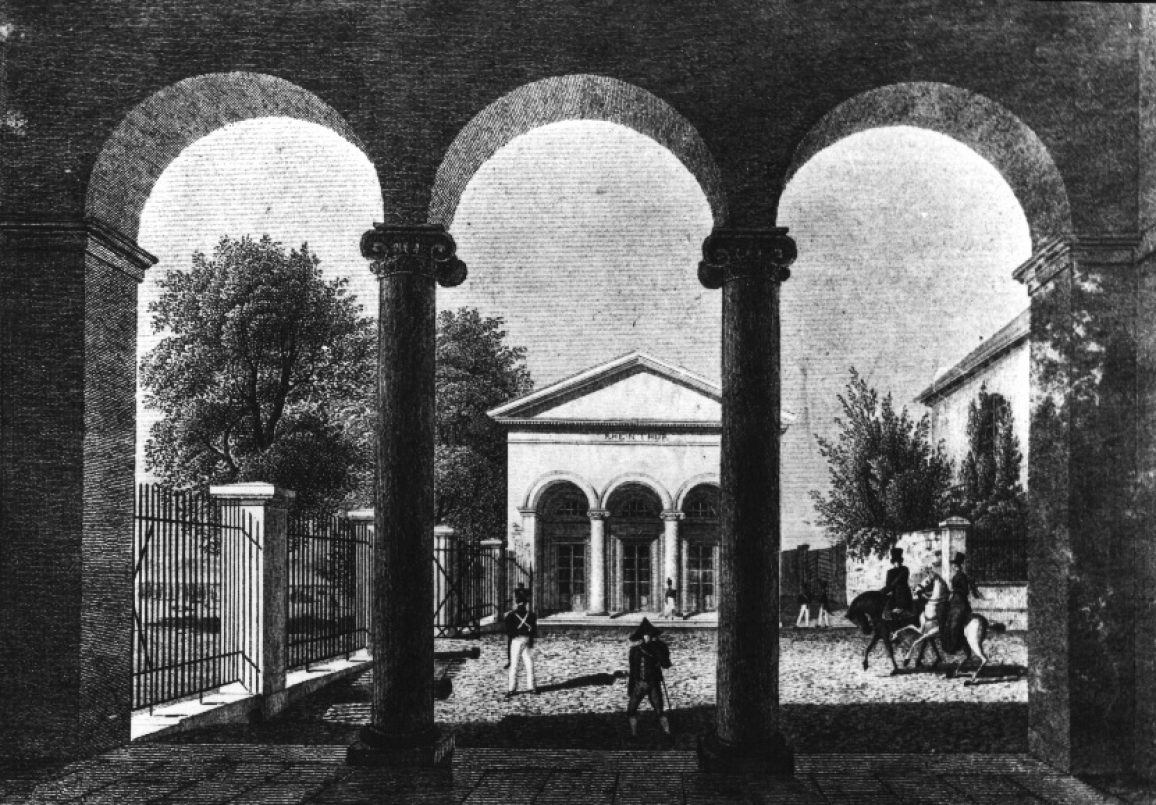 1
The Rheintor
The border with the western entrance to the city was formed by the Rheintor (1812) on the Rheinstraße, consisting of two guardhouses opposite each other, designed by Georg Moller. The Rhine gate was embedded in a green promenade surrounding the district.
Photography: Stadtarchiv Darmstadt 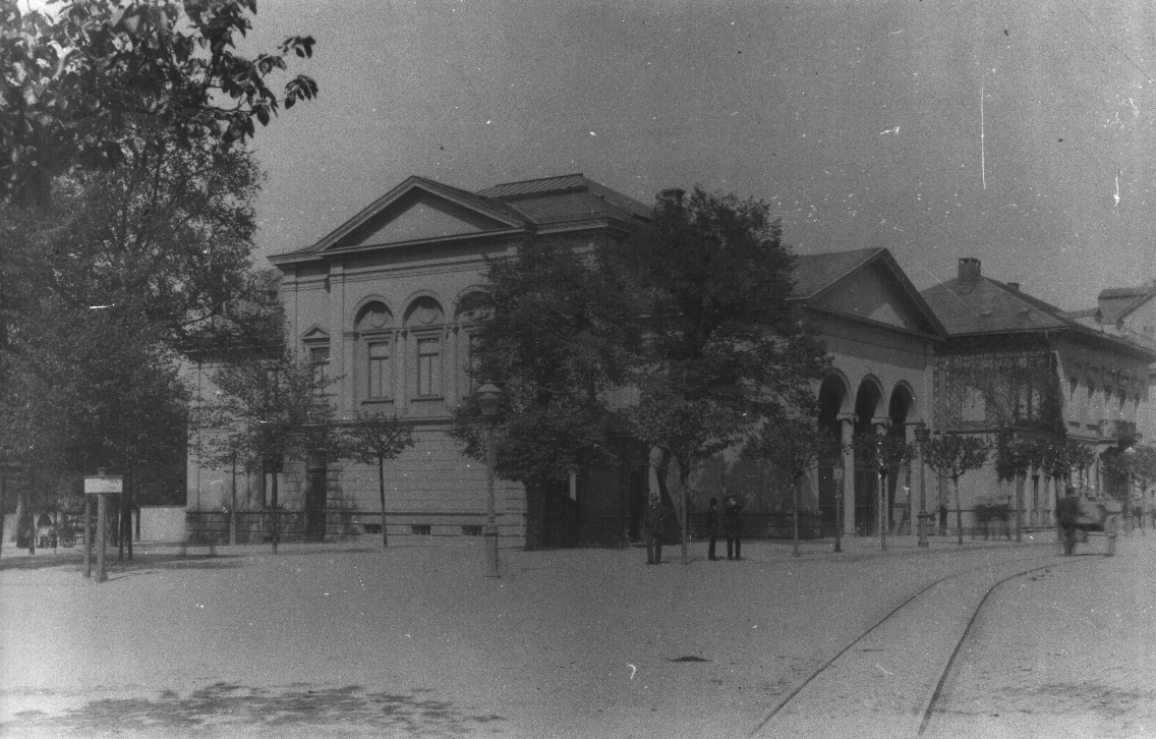 2
The old Kunsthalle
In 1889 the then Kunstverein fur Großherzogtum Hessen (Art Association for the Grand Duchy of Hesse) was given its own exhibition building in the neo-Renaissance style, following the design of the architect Prof. Hermann Müller, who had won a competition. As a site, the city provided the northern guardhouse of the Rheintor, whose portico was used as the entrance to the new Kunsthalle. The location, on the main road of the Rheinstraße and close to the 1846 Main Neckar railway station, could hardly be more favorable. In 1909 the interior was completely redesigned by Prof. Friedrich Pützer.
Photography: Stadtarchiv Darmstadt 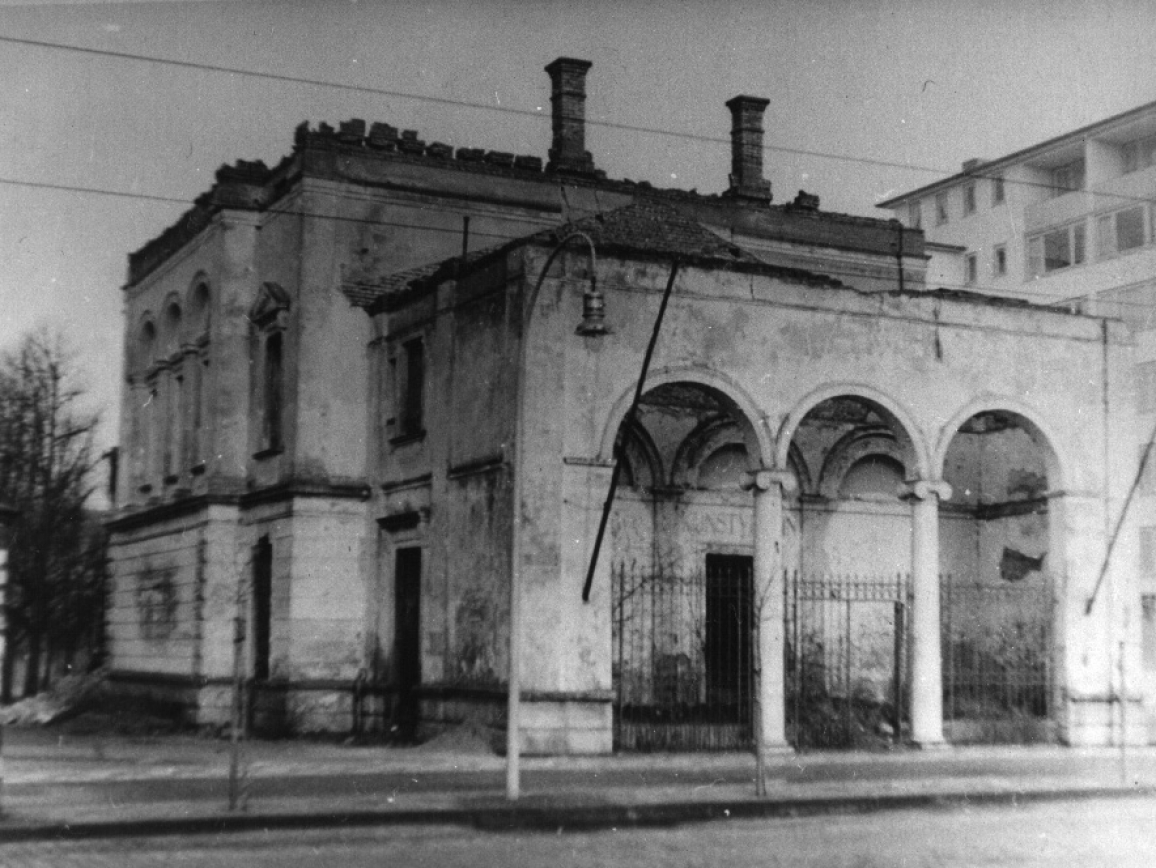 3
The Kunsthalle after the destruction
The so-called Mollervorstadt, the city district designed by Georg Moller, fell victim to the Second World War, and with it also many representative buildings which had characterized the cityscape. The ruins of the Kunsthalle were removed after the war: historicism was out of fashion. Only the portico without a pediment remained as a testimony from Moller’s time.
Photography: Stadtarchiv Darmstadt 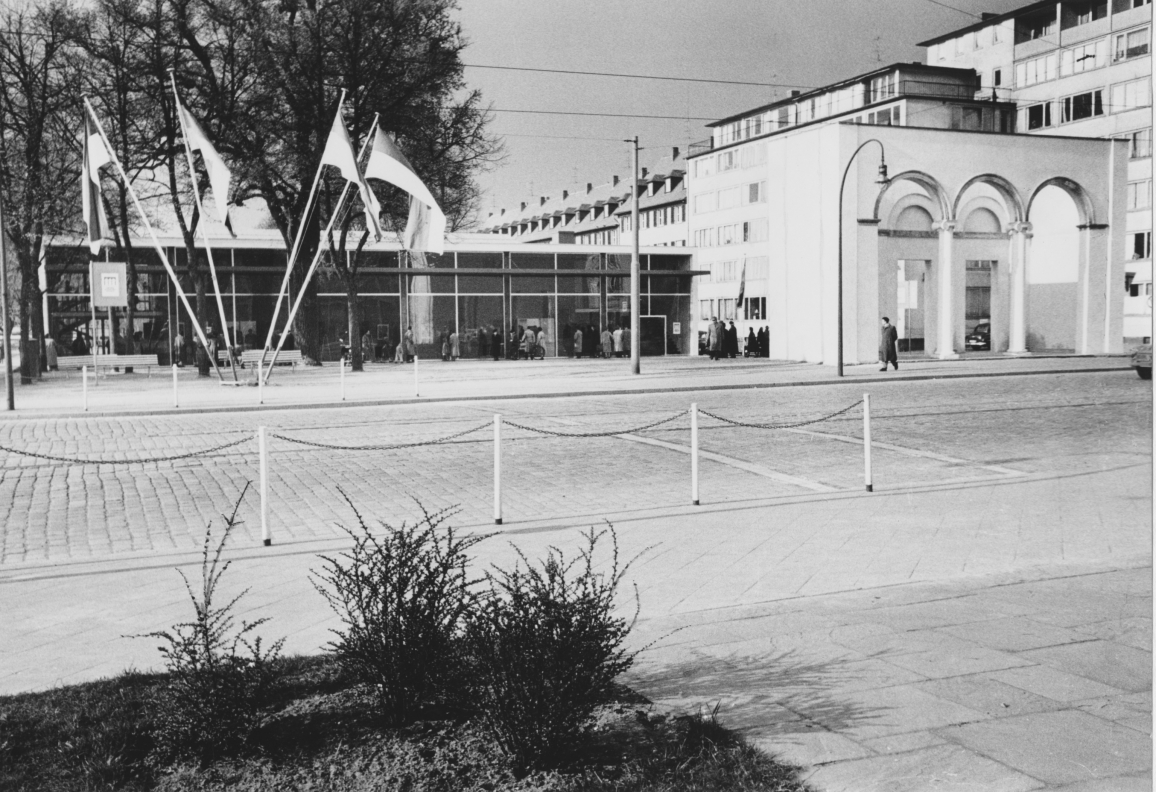 4
The new start in the 1950s
In 1957 following a competition the Kunsthalle, which is today a listed building, was constructed according to the plans of Prof. Theo Pabst on the same site. Although Pabst’s design slightly differs from the position of its predecessor building, it refers to its entrance of the now freestanding Rheintor. With its clear form, simple materials, and design elements as well as its functionality and the tension between closed and open surfaces, the building stands for the architecture of classical modernism of the 1950s and as a manifesto of the new beginning after 1945.
Photography: Stadtarchiv Darmstadt 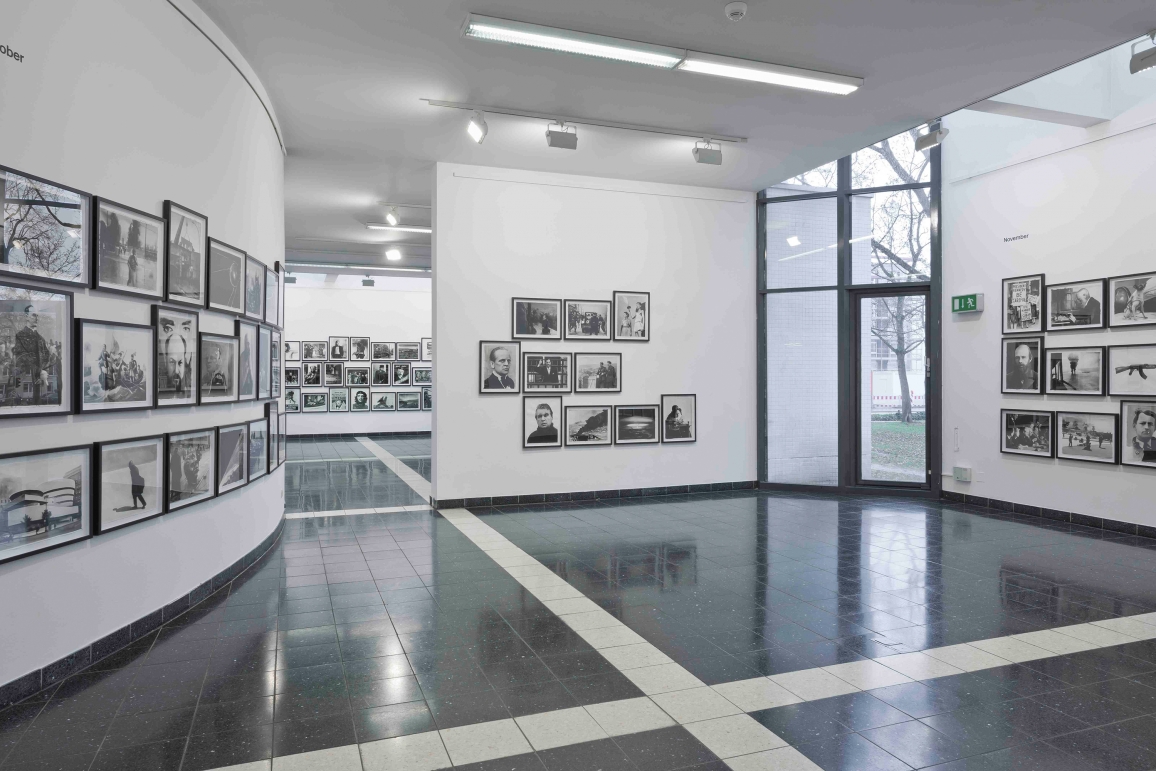 5
The Kunsthalle today
As early as 1964, the Kunsthalle was expanded by Theo Pabst to create offices and additional exhibition space. An extension from 1985 to the north made it possible to have exhibition space on the ground floor and to house offices and galleries on the upper floor. The extension takes the dimensions and design elements of the Pabst building but creates a special exhibition atmosphere as a “garden hall” and opens to the northern green space. (Design: architects Frankfurt, Edgar Eilingsfeld BDA, Hans-Henning Heinz BDA)
© Kunsthalle Darmstadt / Photo: Anke Müllerklein 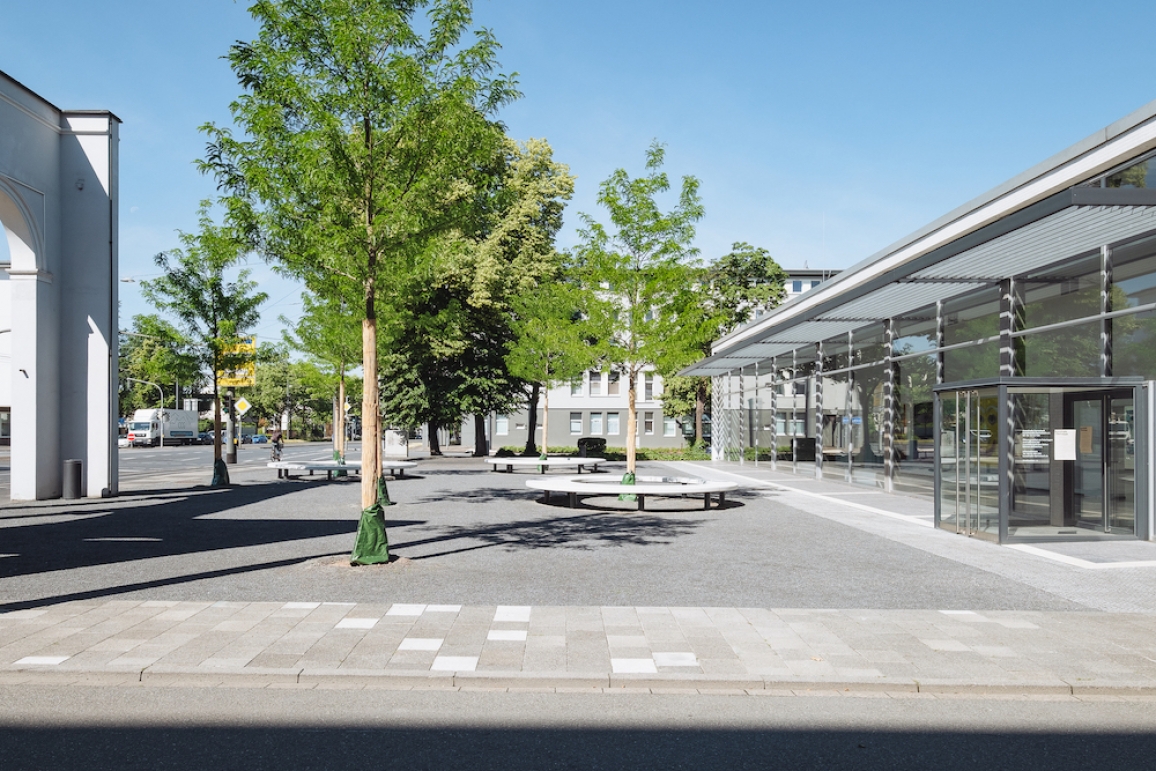 6
General renovation of the Theo-Pabst-Building, 2014-2017
According to preservation standards the Kunsthalle underwent a careful renovation. Besides bringing the building’s technology up-to-date the Kunsthalle’s glass front was redeveloped. Theo Pabst’s idea of an inviting transparency between interior and exterior could be restored.
Photography: fs-Architekten